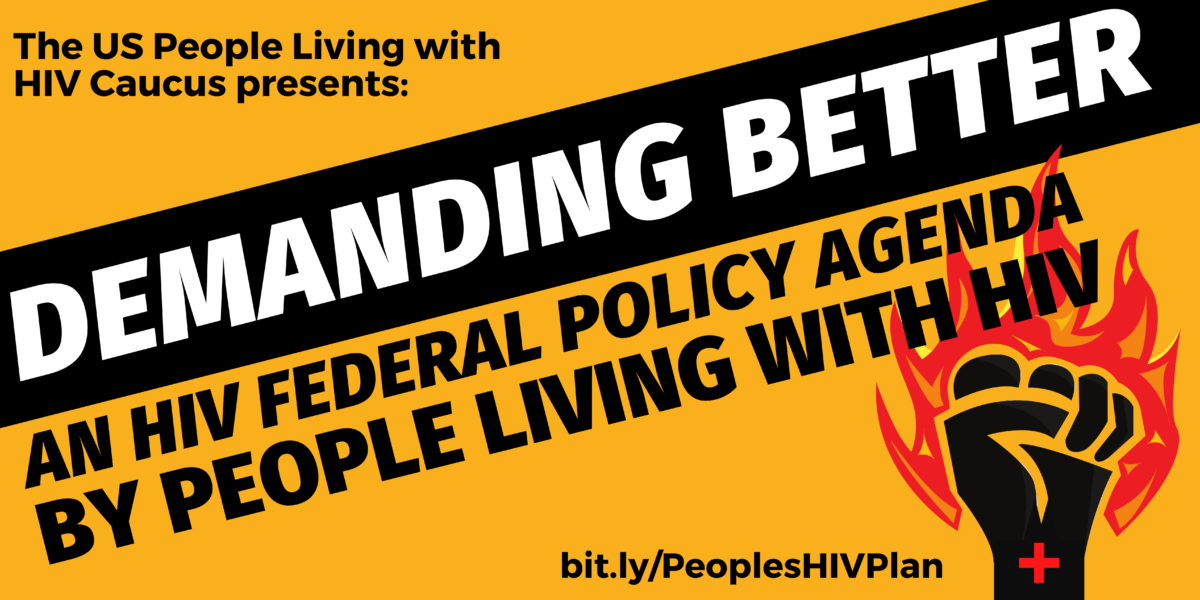 Over forty years into the HIV epidemic, much progress has been made—but the U.S. has a long way to go. The domestic HIV epidemic in the twenty-first century is driven by persistent racial, gender and social inequities. As a result, Black, Latinx, Indigenous, and other communities of color face disproportionate rates of HIV and worse health outcomes once diagnosed. We have powerful treatment and other tools to end the HIV epidemic, but stigma, discrimination, and ongoing human rights violations continue to impede access to healthcare, which is key to ending the epidemic, and harm the quality of lives of PLHIV.

The release of Demanding Better: An HIV Federal Policy Agenda by People Living with HIV  is an important moment in our movement. As networks of PLHIV, we demand a response to HIV that uplifts dignity, human rights, and wellness. Our policy agenda contains recommendations

in 5 issues areas which must be centered in every aspect of the federal HIV response:

1. Concretely elevating the meaningful involvement of people living with HIV and disproportionately impacted communities in the HIV response;

3. Addressing inequities in the federal response by attending to racial and gender disparities;

4. Adding sex workers and immigrants living with HIV as priority populations throughout the federal response; and

5. Affirmatively committing to improving quality of life for people living with HIV.

‍The HIV Caucus is a lead sponsor of AIDSWatch, partnering with AIDS United (AU) and the Treatment Access Expansion Project (TAEP). AIDSWatch is the largest, national, constituent-based HIV advocacy event. Every year, we bring PLHIV and allies to Washington DC (including virtual or hybrid events, as appropriate) to dive into federal policy issues and education of members of Congress.

AIDSWatch is the largest, national, constituent-based HIV advocacy event. Session links from past AIDSWatch events are available below.

40 years into the HIV epidemic, networks of people living with HIV demand a response that uplifts dignity, human rights, and wellness. The policy agenda, written collaboratively by member networks of the U.S. People Living with HIV Caucus, details concrete recommendations for the executive branch and Congress to address shortcomings in the National HIV Strategic Plan and the federal Ending the Epidemic initiative

Thank you! Your submission has been received!
Oops! Something went wrong while submitting the form.
Copyright 2023 © HIV Caucus
All Rights Reserved.